Dissolving the distinctions between organic and inorganic chemistry by coaxing viruses to manufacture microelectronic devices. 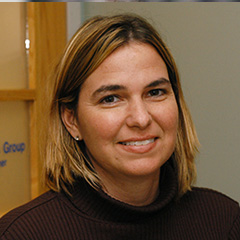 Angela Belcher is a materials scientist whose research opens new avenues for controlling inorganic chemical reactions. Rather than relying on traditional tools of physical chemistry, such as high temperature, pressure, or metallic catalysis, Belcher has devised a means to use genetically engineered viruses to serve as templates for the synthesis of submicroscopic conductors and semiconductors. As a graduate student, she demonstrated how natural proteins in abalone establish templates for the mineralization of calcium carbonates, the principal ingredient of chalk, to form its extremely hard shell. She followed these observations by engineering peptides that bind with great specificity to semiconductor alloys such as gallium arsenide. Belcher has demonstrated a proclivity for developing new techniques for manipulating systems that straddle the boundary of organic and inorganic chemistry at the molecular scale. In her most recent work, she has genetically modified viruses (strains that only attack bacteria and are harmless to humans) to interact with solutions of inorganic semiconductors, yielding self-assembling metal films and wires with diameters in the low tens of nanometers. The ability to control this self-assembly process may one day lead to the next generation of microelectronics or other nanoscale machines.

Angela Belcher received a B.S. (1991) and a Ph.D. (1997) from the University of California, Santa Barbara, where she was also a postdoctoral fellow (1997–1999). In 1999, she joined the Department of Chemistry and Biochemistry at the University of Texas, Austin, as an associate professor. Since 2002, she has been the John Chipman Career Development Associate Professor of Materials Science and Engineering at the Massachusetts Institute of Technology. Her research has been published in journals such as Science and Nature.