Focusing on the role of race in the social and cultural evolution of Egyptian identity and modern Islamic society. 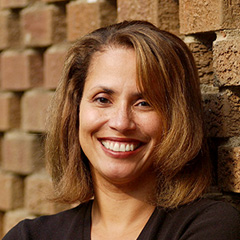 Eve Troutt Powell is a historian whose analysis of nineteenth-century Egypt sheds new light on the complicated dynamics between colonial powers and colonized peoples. In her recent book, A Different Shade of Colonialism: Egypt, Great Britain, and the Mastery of the Sudan, Troutt Powell traces the development of Egyptian nationalist identity during the time of British colonial rule over both Egypt and Sudan. Drawing from a breadth of materials ranging from literary texts, newspapers, and travelogues to more colloquial sources (e.g., cartoons, plays, popular songs), Troutt Powell identifies a distinctly imperialist tone audible in Egyptian nationalist rhetoric. Her study underscores the ways in which Egyptian nationalists projected an image of Sudan as a fellow member of one Nile Valley community, while promoting the incorporation of Sudan’s land, and while Sudanese slaves and servants were still fixtures in many wealthy Egyptian homes. Troutt Powell also points to the ways that the intellectual and political elite distinguished themselves as racially and ethnically superior to the Sudanese, in much the same way that the British colonials distanced themselves from their Egyptian subjects. Thus, Troutt Powell introduces racial stereotyping and slave-holding, topics often overlooked in studies of the Middle East, as practices that played an integral role in the formation of nineteenth-century Egyptian self-image. In so doing, Troutt Powell presents a complex picture of a “colonized colonizer,” one that inspires nuanced interpretations of race-relations and the impact of colonial rule throughout the Middle East, Africa, and beyond.

Eve Troutt Powell received a B.A. (1983) in history and literature, an M.A. (1988) and Ph.D. (1995) in History and Middle Eastern Studies from Harvard University. She has been on the faculty at the University of Georgia, Athens, since 1995. She is the author of A Different Shade of Colonialism: Egypt, Great Britain and the Mastery of the Sudan (2003), and the co-editor of The African Diaspora in the Mediterranean Lands of Islam (2001). Troutt Powell was a Fellow at the Institute for Advanced Study, Princeton, New Jersey, in 1999.