Computer Scientist and Mathematician | Class of 2003

Tackling and solving difficult problems related to folding and bending—moving readily between the theoretical and the playful, with a keen eye to revealing the former in the latter. 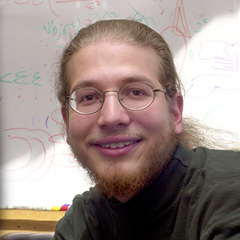 Erik Demaine is a young computer scientist who has already established a reputation for tackling and solving difficult problems. Although he actively pursues projects related to many areas of computer science, such as parallel processing architectures and algorithm complexity, Demaine is noted for his research in computational geometry. Recently, he collaborated on a proof of a long-standing conjecture known as the “carpenter’s rule,” which asserts that all closed polygons with non-crossing connections can be made convex (i.e., straightened out, roughly) without breaking or changing the relative length of the connections. This work reflects his broader interest in problems related to folding and bending. Such problems hold implications for both abstract mathematics and practical issues such as manufacturing methods. Demaine moves readily between the theoretical and the playful, with a keen eye to revealing the former in the latter. For example, he recently demonstrated that a popular computer game, Tetris, represents an example of a computational geometry problem that falls into the “NP-complete” category, implying explosive growth in difficulty with no shortcuts available. Demaine has also invented problems and solutions related to other areas of recreational mathematics (e.g., origami, combinatorial games). Through his eclectic choices for research topics and his prodigious and prolific output, Demaine has demonstrated an appetite for challenges that cross disciplinary boundaries and a capacity to synthesize ideas from disparate approaches.

Erik Demaine received a B.Sc. (1995) from Dalhousie University and an M.Math. (1996) and Ph.D. (2001) from the University of Waterloo. In 2001, he became an assistant professor in the Department of Electrical Engineering and Computer Science and in the Laboratory for Computer Science at MIT. Demaine has presented more than 50 papers at national and international conferences, published dozens of articles in professional publications, written chapters for five books, and co-edited two books. He is currently co-authoring a book, Folding and Unfolding in Computational Geometry.