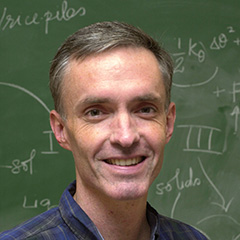 James Collins is a scientist who crosses the boundaries of engineering, mathematics, and biology to explore the complex mechanisms regulating biological systems. He employs theoretical and experimental approaches to understanding movement and associated disorders. His mathematical approach to motor-pattern generation helps to explain locomotion in two-, four-, and many-legged animals. In clinical settings, Collins has demonstrated that the dynamics of foot pressure distribution during quiet standing can provide a useful gauge of stiffness in patients suffering from Parkinson’s disease. Much of his research concentrates on understanding how biological signals can be either degraded or, counterintuitively, enhanced by noise. His laboratory has shown that introducing tiny, random vibrations in footpads markedly improves the ability of older people with peripheral nerve deficits to remain steady on their feet. Collins has recently applied his understanding of the biophysics of noise to the control of gene networks in living cells. His group has devised both experimental (i.e., a genetic toggle switch) and statistical methods for probing the genetic interactions that regulate intracellular physiologic balance. Throughout his research, Collins demonstrates a proclivity for identifying abstract principles that underlie complex biological phenomena and for using these concepts to solve concrete, practical problems.

James Collins received an A.B. (1987) from the College of the Holy Cross and a D. Phil. (1990) from the University of Oxford. Since 1990, he has been at Boston University where he is Professor of Biomedical Engineering, Co-Director of the Center for Biodynamics, and Director of the Applied Biodynamics Laboratory. His publications have appeared in journals such as Nature, Science, Physical Review Letters, Chaos, and the Proceedings of the National Academy of Sciences (USA).