Transforming the cultivation, production, and delivery of healthy foods to underserved, urban populations through a novel synthesis of low-cost farming technologies. 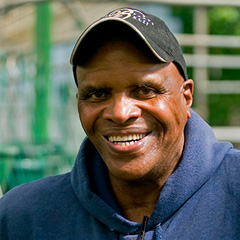 Will Allen is an urban farmer who is transforming the cultivation, production, and delivery of healthy foods to underserved, urban populations. In 1995, while assisting neighborhood children with a gardening project, Allen began developing the farming methods and educational programs that are now the hallmark of the non-profit organization Growing Power, which he directs and co-founded. Guiding all is his efforts is the recognition that the unhealthy diets of low-income, urban populations, and such related health problems as obesity and diabetes, largely are attributable to limited access to safe and affordable fresh fruits and vegetables. Rather than embracing the “back to the land” approach promoted by many within the sustainable agriculture movement, Allen’s holistic farming model incorporates both cultivating foodstuffs and designing food distribution networks in an urban setting. Through a novel synthesis of a variety of low-cost farming technologies – including use of raised beds, aquaculture, vermiculture, and heating greenhouses through composting – Growing Power produces vast amounts of food year-round at its main farming site, two acres of land located within Milwaukee’s city limits. Recently, cultivation of produce and livestock has begun at other urban and rural sites in and around Milwaukee and Chicago. Over the last decade, Allen has expanded Growing Power’s initiatives through partnerships with local organizations and activities such as the Farm-City Market Basket Program, which provides a weekly basket of fresh produce grown by members of the Rainbow Farmer’s Cooperative to low-income urban residents at a reduced cost. The internships and workshops hosted by Growing Power engage teenagers and young adults, often minorities and immigrants, in producing healthy foods for their communities and provide intensive, hands-on training to those interested in establishing similar farming initiatives in other urban settings. Through these and other programs still in development, Allen is experimenting with new and creative ways to improve the diet and health of the urban poor.

Will Allen received a B.A. (1971) from the University of Miami. After a brief career in professional basketball and a number of years in corporate marketing at Procter and Gamble, he returned to his roots as a farmer. He has served as the founder and CEO of Growing Power, in Milwaukee, Wisconsin, since 1995 and has taught workshops to aspiring urban farmers across the United States and abroad.

Will Allen continues to serve as CEO of Growing Power, Inc., which has expanded its programs throughout the Milwaukee and Chicago areas, and he is involved in community food projects across the country. In 2010, he was invited to participate in First Lady Michelle Obama’s Let’s Move! campaign, and in 2011, he received a James Beard Award and was named one of the “World’s Most Influential Foodies” by Michael Pollan and Forbes magazine. He is the author of The Good Food Revolution: Growing Healthy Food, People, and Communities (2012).