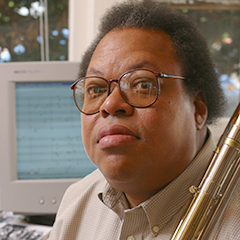 George Lewis is a composer, performer, teacher, theorist, and historian who has opened wide frontiers in experimental music. As a performer, he has mastered the lyrical, tonal, and percussive qualities of the trombone. His compositions bridge traditions of acoustic and electric, American and European, rhythmic and free form. He explores a wide variety of expressive modes, including text-sound collaborations with poets. Lewis has also been a pioneer in the application of computers to algorithmic improvisation. His performances, criticism, and scholarly analyses reveal profound insights into the unique expressive potential of improvisation and its critical role in the history and future of musical expression. In addition to his recent forays into Big Band orchestral performance, he is actively engaged in writing a history of the influential Association for the Advancement of Creative Musicians, of which Lewis himself has been a member since 1971. Through his choice of primary instrumental voice, thematic and tonal motifs, compositional forms, improvisational styles, mathematical analyses, and historical reflections, Lewis sits at the vanguard of contemporary musical expression.

George Lewis studied composition and trombone at the Association for the Advancement of Creative Musicians School of Music. He has taught at Mills College, Simon Fraser University, and the School of the Art Institute of Chicago. Currently at the University of California, San Diego, Lewis is Professor of Music in the critical studies/experimental practices area. More than 90 recordings document his work as a composer, improviser, performer and interpreter. Lewis has received fellowships from the National Endowment for the Arts, and he received the Cal Arts/Alpert Award in the Arts in 1999. He has published articles on music and cultural studies and is the author of the forthcoming Power Stronger than Itself: The Association for the Advancement of Creative Musicians.

George E. Lewis is the Edwin H. Case Professor of American Music at Columbia University. A Fellow of the American Academy of Arts and Sciences and a Corresponding Fellow of the British Academy, Lewis’s other honors include a Guggenheim Fellowship (2015) and a United States Artists Walker Fellowship (2011). In 2015, Lewis received the degree of Doctor of Music (DMus, honoris causa) from the University of Edinburgh. His work in electronic and computer music, computer-based multimedia installations, and notated and improvisative forms is documented on more than 150 recordings, and has been presented by the BBC Scottish Symphony Orchestra, Ensemble Dal Niente, London Philharmonia Orchestra, Radio-Sinfonieorchester Stuttgart, London Sinfonietta, Talea Ensemble, Ensemble Pamplemousse, Wet Ink, American Composers Orchestra, International Contemporary Ensemble, Harvestworks, Ensemble Either/Or, 2010 Vancouver Cultural Olympiad, IRCAM, and others. Lewis has served as Ernest Bloch Visiting Professor of Music, University of California, Berkeley; Paul Fromm Composer in Residence, American Academy in Rome; and Resident Scholar, Center for Disciplinary Innovation, University of Chicago. Lewis received the 2012 SEAMUS Award from the Society for Electro-Acoustic Music in the United States, and his widely acclaimed book, A Power Stronger Than Itself:  The AACM and American Experimental Music (University of Chicago Press, 2008) received the American Book Award and the American Musicological Society’s Music in American Culture Award. Lewis is the co-editor of the two-volume Oxford Handbook of Critical Improvisation Studies (2016), and his opera Afterword (2015), commissioned by the Gray Center for Arts and Inquiry at the University of Chicago, has been performed in the United States, United Kingdom, and the Czech Republic.