Working meticulously in wax, oil, and pencil to create immense but delicate drawings on vast stretches of unframed paper. 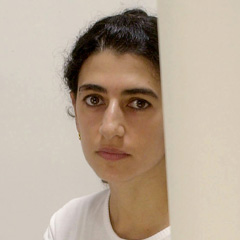 Toba Khedoori is a young artist whose large-scale drawings and paintings on paper appear to float in empty space. Unlike many contemporary artists who employ newer methods such as installations and video projections, Khedoori uses traditional materials—wax, oil paint, and pencil—to create immense but delicate drawings on vast stretches of unframed paper. Her imagery represents urban or architectural elements—such as rows of windows in a façade, a corridor lined with closed doors, or bricks in a dislocated wall—that define our living space. While the work is realistic in its detailed representation of images, it is abstract in the isolation in which the artist places these images. Her quiet, reticent works operate on both a cerebral and an emotional level. They can be likened to visual poems, conveying a sense of mystery and inviting the viewer to speculate on their meaning while appreciating their serene beauty.

Select News Coverage of Toba Khedoori
"Is it a Maze? A Mystery? Or Is the New Show at PAMM a Subtle Study in Yin & Yang?"
Miami Herald
Toba Khedoori , 2002 MacArthur Fellow