Computer Scientist and Linguist | Class of 2002

Improving the capacity for computers to process natural language by analyzing the syntax and usage of ordinary sentences. 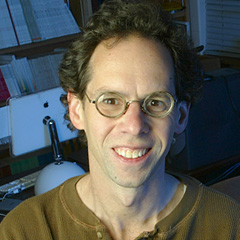 Daniel Jurafsky is a computer scientist whose work establishes the foundations for developing systems that use natural language to interact with people. Much of his research has focused on identifying patterns in syntax that provide clues to the underlying semantic structure of communication. Computational linguists have developed several large, annotated databases (known as corpora) that represent and reflect the ordinary use of a language; many of the entries have more than one grammatically correct interpretation. By identifying the syntactic patterns of a large number of actual sentences (using statistical methods such as Hidden Markov Models and Bayesian analyses), Jurafsky and his colleagues have found that computer parsers can be made more efficient by focusing on the most likely interpretations. He, nevertheless, moves readily beyond the domain of algorithm development into human language production and processing. His collaborative efforts have shown, for example, that words are pronounced more precisely if they are critical to the listener for resolving potential ambiguities. Jurafsky also investigates the patterns of human dialog to identify the hidden assumptions about shared knowledge that are critical to smooth conversational flow. In addition to offering new perspectives for further empirical research into psycholinguistics, Jurafsky's basic research directly enhances the engineering of human-machine natural language systems.

Daniel Jurafsky received a B.A. (1983) and a Ph.D. (1992) from the University of California, Berkeley. He worked as a software engineer and consultant before pursuing post-doctoral studies at the International Computer Science Institute in Berkeley, California. Jurafsky has been affiliated with the Department of Linguistics at the University of California, Berkeley (1993–1994). He joined the University of Colorado faculty in 1996; he is currently an associate professor with appointments in the linguistics and computer science departments as well as the Institute of Cognitive Science. He is the co-author of the textbook, Speech and Language Processing: An Introduction to Natural Language Processing (2000) and co-editor of Cognition and Function in Language (1999).

Dan Jurafsky is a professor in the Departments of Linguistics and Computer Science, and chair of the Department of Linguistics, at Stanford University, where he co-created one of the first massively open online courses: Stanford’s course in Natural Language Processing. His recent research has focused on the extraction of meaning from text and speech and on applying natural language processing technology to the behavioral and social sciences. His most recent book is The Language of Food: A Linguist Reads the Menu (2014).