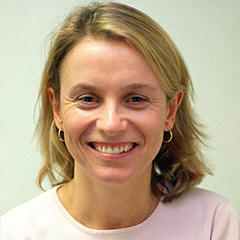 Geraldine Seydoux is a scientist providing key insights into biology’s most complex processes: the creation of a fully formed adult animal from a single cell and the repetition of the process in the next generation. Development of specialized tissues depends on establishing an initial asymmetry in the embryo, but the precise control of this process in many species is unclear. Seydoux has demonstrated that, in the nematode, early asymmetry derives from the interaction of particular structures within the ovum and sperm at fertilization. In another line of research, she has demonstrated that proteins within the fertilizing sperm trigger reorganization of structural proteins within the ovum, a process that is the necessary first step for establishing anterior-posterior polarization of the single-celled embryo. Seydoux’s observations reveal an elaborate molecular dance by these proteins, leading to the formation of organs in the mature animal. Several lines of evidence suggest that the mechanisms she describes for nematode development are conserved in evolution throughout much of the animal kingdom.

Geraldine Seydoux received a B.S. (1986) from the University of Maine, Orono, and a Ph.D. (1991) from Princeton University. She has been a professor in the Department of Molecular Biology and Genetics at the Johns Hopkins University since 1995.