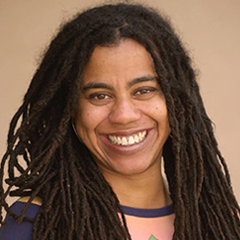 Suzan-Lori Parks is a playwright whose risk-taking, dramatic presentations reflect and refract social imagery from American culture and history. By creating compelling stories and characters that dramatize the complex influences that form both individual and collective identity, her explorations challenge us to reconsider our perceptions of others and ourselves. In Venus (1997), Parks ignores the common conventions of stage realism to call attention to the ambivalent depiction of racism, sexism, and economic oppression seen in postbellum U.S. theatrical productions. By contrast, In the Blood (1999) presents us with a meditation on social responsibility and the treatment of the most indigent. These and other works are characterized by her signature use of provocative stagecraft, gritty colloquialisms, and wordplay inspired by the looped and spiraling forms of jazz.