Unraveling the interrelated physical, chemical, geological, and biological forces that have shaped the oceans’ fertility and the Earth’s climate over the past two million years. 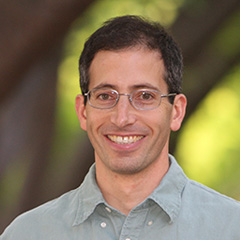 Daniel Sigman is a biogeochemist who explores the interaction of biomass and climate in shaping the Earth’s geologic history. He is a leader in the use of nitrogen isotopic studies for understanding modern ocean biogeochemistry and for the reconstruction of ocean chemistry history. It has been clear for some years that the varying abundance of stable isotopes of nitrogen and oxygen in oceanic nitrate and in sedimentary deposits reflects changes in the Earth’s nutrients and carbon cycle during previous periods of climatic history. Sigman’s research focuses in large part on determining the role of carbon dioxide sequestration (through death of photosynthetic creatures that drop to the bottom of the ocean). In an important technical advance, he developed an enzymatic method to measure the nitrogen in tiny, unicellular creatures known as diatoms, which are trapped within ocean sediments. By comparing the bioavailable inorganic nitrogen (e.g., in nitrates or ammonium) with organic nitrogen extracted from once living cells, Sigman has been able to construct models of paleoceanographic nitrogen cycling. Using sediments collected from the deep sea floor — both at its surface and deeper core samples — at various water depths and latitudes throughout the world’s oceans, Sigman is carefully reconstructing the quantitative net contribution of ocean biology to the carbon cycle over geological time scales. He and his colleagues are also developing clearer notions of the effects of biomass in present-day carbon cycling. To this end, he has improved the resolution of a method for measuring nitrate flux through sophisticated analysis of the stable oxygen and nitrogen isotopes. Such advances promise to give us an ever-sharper picture of the physical, chemical, geological, and biological forces that have regulated the oceans’ fertility and the Earth’s climate over the past two million years.

Daniel Sigman received a B.S. (1991) from Stanford University and a Ph.D. (1997) from the Massachusetts Institute of Technology/Woods Hole Oceanographic Institution’s Joint Program in Oceanography. In 2009, he was named the Dusenbury Professor of Geological and Geophysical Sciences in the Department of Geosciences at Princeton University, where he was previously a postdoctoral fellow (1998-1999), an assistant professor (2000-2006), and a professor (2006-2009).