Expanding the options for those suffering from severe mental illness through scholarship, practice, and policy informed by a life story that adds uncommon depth and insight. 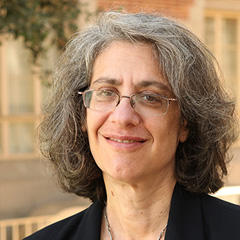 Elyn Saks is a legal scholar and mental health-policy advocate whose work and life story are expanding the options for those suffering from severe mental illness. Trained at Oxford in philosophy, at Yale in jurisprudence, and currently a Ph.D. candidate in psychoanalysis, Saks is recognized by the mental health profession and by legal scholars alike as an important contributor to national debates on mental health policy. She has played a major role in contemporary discussions of mental health law, patients’ rights, and multiple-personality disorder, including such issues as involuntary commitment, competency to be executed, proxy consent, and the right to refuse treatment. Her contributions and commitment to mental health law took on a personal dimension with the publication of her 2007 memoir, The Center Cannot Hold: My Journey Through Madness. In this memoir, Saks made public for the first time her lifelong struggle with schizophrenia, including severe episodes of psychosis as well as experiences with misguided or harmful treatments. Remarkably, she has been able to overcome this usually debilitating illness, bringing to her work both expert and firsthand perspectives. Though Saks achieved professional acclaim as a legal scholar before most friends and colleagues knew of her own battle with mental illness, the publication of her memoir has provided additional gravity to her contribution to scholarship, practice, and policy. Currently, Saks is leading a study with a multidisciplinary team of colleagues to understand better high-functioning schizophrenics, a largely unexamined area. Her personal biography will give this study an uncommon depth and richness and further extend her impact on mental health law and disability rights policy.

Elyn Saks received a B.A. (1977) from Vanderbilt University, an M.Litt. (1981) from the University of Oxford, and a J.D. (1986) from Yale Law School. Her additional publications include numerous scholarly articles and the books Interpreting Interpretation: The Limits of Hermeneutic Psychoanalysis (1999) and Refusing Care: Forced Treatment and the Rights of the Mentally Ill (2002). She joined the faculty of the University of Southern California Gould School of Law in 1989, where she is currently associate dean and the Orrin B. Evans Professor of Law, Psychology, and Psychiatry and Behavioral Sciences.