Improving our capacity to control the spatial organization of ultra-cold atoms and applying these advances to both fundamental inquiry and technology. 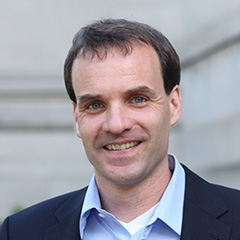 Markus Greiner is an experimental physicist who is advancing our capacity to control the spatial organization of ultra-cold atoms with the aim of revealing basic principles of condensed matter physics. The past twenty years have seen enormous strides in cooling atoms with evaporation and lasers to the point that their quantum behavior can be directly observed and controlled. As a student and postdoctoral fellow, Greiner participated in several seminal studies in this area. His current research program is taking this line of inquiry to the next step by designing an apparatus that can trap thousands of ultra-cold atoms in well-ordered 2-dimensional arrays, or lattices. Because ultra-cold atoms in an optical lattice behave much like electrons in a solid-state crystal, quantum phenomena like superconductivity can be investigated under conditions much better controlled than with complex crystals. Greiner recently created a quantum gas microscope that allows direct visualization of each individual atom within a 2D optical lattice. With this device, his team was able to simulate how solid-state crystals transition between insulating and superconducting states and investigate quantum magnets, two of many possible experimental applications for such a tool. Because optical lattices offer high-resolution control over the quantum state of hundreds or thousands of individual elements, they may also represent an important platform for investigating quantum computing or high-density information storage. Still early in his career, Greiner has already demonstrated the ability to develop techniques that open new avenues for exploration of physics and to apply these advances to both fundamental physics and technology.

Markus Greiner received a Diplom (2000) and a Ph.D. (2003) from Ludwig-Maximilians-Universität in Munich. He was a postdoctoral researcher (2003-2005) at JILA at the University of Colorado, Boulder, prior to joining the faculty in the Department of Physics at Harvard University, where he is currently an associate professor. His scientific articles have appeared in such publications as Nature, Science, and Physical Review Letters.