Ensuring that unsolved murders from the Civil Rights era are finally prosecuted by uncovering largely unknown details of decades-old stories of thwarted justice. 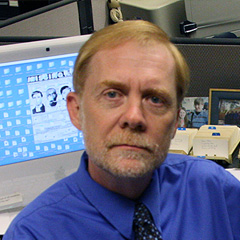 Jerry Mitchell is an investigative reporter with the Jackson, Mississippi, Clarion-Ledger whose courageous efforts have ensured that unpunished murders from the Civil Rights era are finally prosecuted. In 1989, Mitchell began his immersion in decades-old stories of thwarted justice and undertook a meticulous review of the 1963 assassination of NAACP leader Medgar Evers. Ku Klux Klan member Byron de la Beckwith had been tried twice for this crime in 1964, and each trial ended in hung juries. By analyzing hundreds of documents and interviewing scores of witnesses, Mitchell laid the groundwork for a new trial. The case was reopened and culminated in the conviction and life sentence of Beckwith in 1994. Mitchell has since uncovered largely unknown details about many other long-dormant murder cases. His reporting has played a key role in the convictions of Klan Imperial Wizard Sam Bowers for ordering the fatal firebombing of NAACP leader Vernon Dahmer in 1966, of Bobby Cherry for the 1963 bombing of a Birmingham church that killed four girls, and of Edgar Ray Killen for helping to orchestrate the 1964 deaths of three civil rights workers in Neshoba County, Mississippi. His investment of time and painstakingly detailed research has also produced a broad range of reports on such subjects as racial reconciliation in the South and judicial bribes and chicanery in Mississippi, as well as a series on his own family’s battle against a rare genetic ailment. In an era when long-term investigative reporting is more the exception than the rule, Mitchell’s life and work serve as an example of how a journalist willing to take risks and unsettle waters can make a difference in the pursuit of justice.

Jerry Mitchell received a B.A. (1982) from Harding University and an M.A. (1997) from Ohio State University. He joined the Jackson, Mississippi, Clarion-Ledger in 1986 as a bureau reporter, before turning to investigative reporting in 1989.

Jerry Mitchell continues to serve as investigator reporter at the Jackson, Mississippi, Clarion-Ledger. Eight days after his 2014 story showed problems with the conviction of Michelle Byrom, the Mississippi Supreme Court ordered her off death row. His 2014 stories also revealed deep corruption inside the Mississippi corrections system, including guards opening locks to let gangs carry out killings and prisons receiving perfect scores, despite horrid conditions, from an organization headed by Mississippi corrections commissioner Chris Epps (Epps now faces corruption charges). In 2015, the nation’s oldest prosecution of a serial killer suspect will take place due to Mitchell’s articles. In 2016, the nation’s oldest conviction of a serial killer took place after Mitchell’s articles brought new attention to the case. His book, Race Against Time: A Reporter Reopens the Unsolved Murder Cases of the Civil Rights Era, was published in 2020.