Investigating principles underlying the behavior of complex systems to address such accessible, but vexing, questions as how flags flutter, how skin wrinkles, how Venus flytraps snap closed. 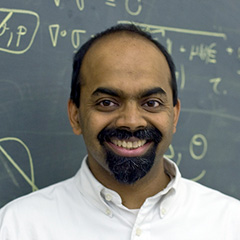 L. Mahadevan is a mathematician who applies complex mathematical analyses to a variety of seemingly simple, but vexing, questions across the physical and biological sciences — how cloth folds when draped, how skin wrinkles, how flags flutter, how Venus flytraps snap closed. Through his explorations of shape and motion, in many different material types, sizes, and time frames, Mahadevan strives to identify commonalities of the fundamental nonlinear and nonequilibrium behavior driving them. One line of his research considers the relationship between the biochemistry and mechanics of structural molecules that form polymers, such as actin, within the cell. These investigations have parallels in his work on the hydrodynamics and elasticity of thin films and sheets (e.g., made of fabric). Mahadevan also considers properties of materials at larger scales, such as cell shape, adhesion, and migration in developmental biology, avalanche dynamics, or the role of water in determining the tensile characteristics of plants. Though he searches for and elucidates mathematical principles underpinning these complex behaviors, his focus remains on developing hypotheses that can be confirmed or rejected empirically in the lab. The unusually broad scope of his theoretical and experimental investigations defies facile categorization, but they are linked by an effort to discover the geometric and mechanical principles that determine the behavior of complex biological and physical systems.

L. Mahadevan received a B.Tech. (1986) from the Indian Institute of Technology in Madras, an M.S. (1987) from the University of Texas at Austin, and an M.S. (1992) and Ph.D. (1995) from Stanford University. Since 2003, he has been affiliated with Harvard University, where he is currently the De Valpine Professor of Applied Mathematics. He served previously as an assistant and associate professor (1996-2000) in the Department of Mechanical Engineering at Massachusetts Institute of Technology and as the Schlumberger Professor of Complex Physical Systems (2001-2003) in the Department of Applied Mathematics and Theoretical Physics and a fellow of Trinity College at the University of Cambridge. He holds visiting professorships at the University of Oxford’s Mathematics Institute and the National Center for Biological Sciences in Bangalore, India.