Advancing our understanding of the role of microRNAs in the development of cancer and laying the groundwork for future cancer treatments. 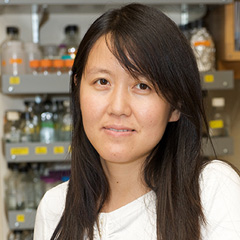 Lin He is a molecular biologist whose research has made pivotal contributions to an active, new avenue of cell biology: the role of microRNAs in the development of cancer. Her graduate training focused on the relationship between pigmentation genes and behavior and neuropathology. She and her colleagues identified a mouse gene mutation, mahoganoid, that exhibits age-dependent neural degeneration similar to prion diseases (e.g., mad cow disease) but without the degradation-resistant misfolded proteins characteristic of prion diseases. As a postdoctoral researcher, she shifted focus in an entirely new direction, working on microRNAs. Unlike messenger RNA, microRNAs are not translated into proteins. Lin He and colleagues established that a specific family of microRNAs, mi-34, plays an important role in the p53 tumor suppressor network, which works by blocking tumor cells from replicating or inducing their suicide. These findings are supported by the observation that many human tumors have chromosomal deletions that include the region where mi-34 RNAs are located. In independent research as a recent assistant professor, Lin He is working both to elucidate further the precise mechanism that each mi-34 subtype plays in the p53 pathway and to investigate the role of a different microRNA, mir17-92, in the development of B cell lymphomas. In an area that has generated intense effort among many leading researchers, Lin He has established early in her career the capacity to make significant advances with direct implications for the development of future cancer treatment strategies.

Lin He received a B.S. (1997) from Tsinghua University in Beijing, China, and a Ph.D. (2003) from Stanford University. She was a postdoctoral fellow (2003-2007) at Cold Spring Harbor Laboratory prior to becoming an assistant professor of molecular and cell biology at the University of California, Berkeley, in 2008. Her scientific articles have appeared in such journals as Nature, Nature Genetics, and Science.