Analyzing the forces perpetuating cycles of poverty in South Asia and Africa and enhancing the policies and interventions designed to improve lives. 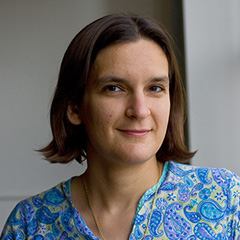 Esther Duflo is a development economist exploring the social and economic forces perpetuating the cycle of poverty for the poorest peoples in South Asia and Africa. Combining innovative field experiments with rigorous empirical analysis, she identifies linkages and causal relationships between policy, poverty, behavior, and socioeconomic status. Much of Duflo’s work focuses on investigating the often disparate impact of economic interventions and social policies on women and children in developing nations. In one study, she measured the effect of monetary transfers to poor households for child health and found that pension transfers to grandmothers, rather than grandfathers, brought about the greatest improvement in the health of girls. Most recently, Duflo partnered with environmental economists to examine the long-term health effects on women and children of indoor pollution from traditional, solid-fuel cooking stoves. Through MIT’s Abdul Latif Jameel Poverty Action Lab, which she co-founded, she has adapted randomized trial experiments, used extensively in the drug industry and experimental science, as a means of bringing increased rigor to the assessment of the costs and benefits of economic development interventions. Duflo also was among the founders of the Bureau for Research in Economic Analysis and Development (BREAD), a forum that facilitates the exchange of ideas among researchers working on development issues. Through these and many other projects, Duflo is enhancing international economic development policy and programs designed to improve the lives of impoverished populations around the world.

Esther Duflo received a Maitrise (1994) from the École Normale Supérieure in Paris, an M.A. (1995) from the Department and Laboratory of Applied and Theoretical Economics at ENS, and a Ph.D. (1999) from Massachusetts Institute of Technology. She joined the Department of Economics at M.I.T. as an assistant professor in 1999. Since 2005, she has been the Jameel Professor of Poverty Alleviation and Development Economics and a director of the Jameel Poverty Action Lab at M.I.T. Duflo is also a research associate at the National Bureau of Economic Research and director of the development economics program at the Center for Economic Policy Research.