Rendering minutely detailed landscapes of unexpected vistas that reconsider the intersection between the built and the natural world. 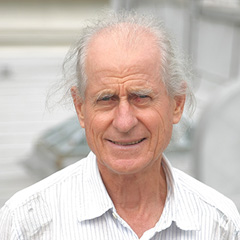 Rackstraw Downes is a painter whose minutely detailed, oil-on-canvas landscapes invite viewers to reconsider the intersection between the natural world and man-made objects. Turning from abstract painting in the early 1960s, Downes has pursued a unique approach to realism that defies standard categorization. He begins each work with drawings and oil sketches before it is meticulously painted on site; in order to capture the precise details of lighting and weather, he can spend many months completing a single piece. Rejecting picturesque views characteristic of much realist work, his landscapes depict scenes generally overlooked or dismissed for lack of a traditional aesthetic appeal. His subjects range from the roadways, urban detritus, and industrial backyards of the East Coast to the oil fields and vast, empty terrain of Texas. In painting the American landscape as it is, not as it has been idealized, Downes imbues seemingly ordinary subjects with extraordinary power. His artistry is deeply rooted in the history and thought of painting, and he has written highly regarded essays on visual and literary artists as varied as John Constable, Fairfield Porter, and Samuel Beckett. Considered one of the most distinctive representational painters of his generation, Downes is challenging familiar conceptions of realist painting in works of formal rigor and quiet, yet stunning, beauty.

Rackstraw Downes received a B.A. (1961) from the University of Cambridge and a B.F.A. (1963) and M.F.A. (1964) from Yale University. His work is in the permanent collections of the Art Institute of Chicago, the Museum of Modern Art, the Museum of Fine Arts, Houston, and the National Gallery of Art, among many others. His essays have appeared in such publications as the New York Times, Art in America, and Art Journal.