Decoding the genomes of virulent human pathogens that cause such diseases as leishmaniasis, sleeping sickness, and river blindness and threaten the lives of millions in the developing world. 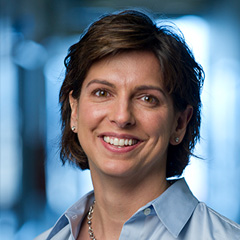 Elodie Ghedin is a biomedical researcher who is harnessing the power of genomic sequencing techniques to generate critical insights about human pathogens. Although the technology for obtaining nucleotide sequence data continues to accelerate, the labor-intensive task of analyzing and annotating the resulting data — for example, identifying genes, their functions, and their expression; determining the arrangement of genes within the genome; performing phylogenetic and functional comparisons with other known species — often lags behind. Ghedin has established herself as a leader of international projects that coordinate the efforts of scores of scientists to decode the function of some of the most virulent human pathogens. A major focus of her work has been parasites that cause diseases endemic to tropical climates, such as leishmaniasis, sleeping sickness, Chagas disease, elephantiasis, and river blindness. Through her direct research and mobilization of global scientific collaborations, Ghedin's work illuminates the similarities and differences in the molecular physiology of the various parasites, with important implications for targets for drug development. In addition, Ghedin and her colleagues are applying similar approaches to understanding viruses that infect humans. RNA viruses such as HIV and influenzae mutate particularly rapidly, making vaccine development difficult. In a high-resolution study of complete genome sequences of influenza A from thousands of isolates collected in the New York area, Ghedin and colleagues showed that the virus evolves with surprising rapidity even in a circumscribed geographic region. Through her contributions to parasitology and virology, Ghedin demonstrates that molecular genetics is not only essential for exploring the basic biology of pathogens but also represents a powerful tool in the hands of scientists working in coordination to improve public health across the globe.

Elodie Ghedin received a B.S. (1989) from McGill University, an M.S. (1993) from Université du Québec à Montréal, and a Ph.D. (1998) from McGill University. She was a postdoctoral fellow at the National Institute of Allergy and Infectious Diseases (1998-2000) and led the Viral Genomics group at the Institute for Genomic Research (2000-2006) prior to her appointment to the faculty of the University of Pittsburgh, where she is currently an assistant professor in the Department of Computational and Systems Biology and a member of the Center for Vaccine Research. She is also an associate investigator at the J. Craig Venter Institute. Her scientific articles have appeared in such publications as the Journal of Virology, Science, and Nature.

Since 2014, Elodie Ghedin has been affiliated with New York University, where she is currently a professor in the Department of Biology and School of Global Public Health and affiliated with the Center for Genomics and Systems Biology.