Chronicling the power of human resistance and endurance through moving and insightful depictions of the Haitian immigrant experience. 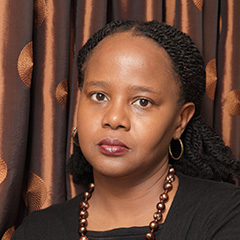 Edwidge Danticat is a novelist whose moving and insightful depictions of Haiti’s complex history are enriching our understanding of the Haitian immigrant experience. In works that chronicle the lives of ordinary Haitians, she evokes themes of family, isolation, and community that, while grounded in a specific cultural milieu, resonate with a wide range of audiences. With graceful, deceptively simple prose, she recounts the 1937 massacre of Haitian workers in the Dominican Republic in The Farming of Bones (1999); told through the eyes of a young domestic servant, the story of the atrocity becomes one of cultural and spiritual survival. In The Dewbreaker (2004), a series of seemingly disconnected stories are revealed to revolve around the same traumatic events. Danticat challenges readers of these stories to understand and forgive a perpetrator of horrific atrocities committed in a distant time and place, illustrating how events in Haiti continue to haunt the immigrants of the diaspora. Her most recent book, a memoir entitled Brother, I’m Dying (2007), pays tribute to her father and uncle through an unflinching account of the triumphs and tragedies they experienced in Haiti and the United States. In these and other works, Danticat provides a nuanced portrait of the intersection between nation and diaspora, home and exile, and reminds us of the power of human resistance, renewal, and endurance against great obstacles.

Since 2009, Edwidge Danticat has published several books, including Eight Days (2010), a picture book; Create Dangerously (2010), a collection of essays; and Claire of the Sea Light (2013), a novel. Danticat also appeared in the independent film Stones in the Sun (2014) and worked on a documentary called Girl Rising (2013). She has two forthcoming publications: Untwine, a young adult novel, and Mama’s Nightingale, a picture book.