Enriching our understanding of colonial and early American interracial relations by disentangling the complicated history of two distinct founding families. 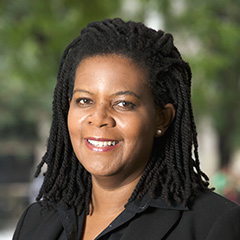 Annette Gordon-Reed is a legal scholar and historian whose persistent investigation into the life of an iconic American president has dramatically changed the course of Jeffersonian scholarship. Fascinated from childhood by the Jefferson family, Gordon-Reed began a comprehensive re-examination of the evidence about the rumored committed relationship between Thomas Jefferson and his slave Sally Hemings. Independent of her responsibilities as a law professor, she wrote her first book, Thomas Jefferson and Sally Hemings: An American Controversy (1997). While the liaison had been widely alleged contemporaneously and since, it was also largely dismissed, then and later, by archivists and historians. Although she is not a formally trained historian, Gordon-Reed drew on her legal training to apply context and reasonable interpretation to the sparse documentation about the shared lives of her protagonists at Monticello, in London, and in Paris. After publication, An American Controversy was received skeptically by some, but her conclusions were confirmed in 1998 when DNA evidence supported the documentary evidence of Jefferson’s genetic paternity. Gordon-Reed has continued her inquiry into colonial interracial relations in The Hemingses of Monticello: An American Family (2008), which follows the Hemings family through the nineteenth century and along markedly different paths of racial assimilation and integration. In disentangling the complicated history of two distinct founding families’ interracial bloodlines, Gordon-Reed is shaping and enriching American history with an authentic portrayal of our colonial past.