Combining archaeological scholarship with historical preservation to reveal the dynamics of intellectual and social life in New Orleans from its establishment as a French colony to the present day. 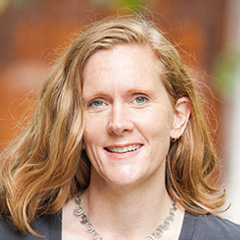 Shannon Lee Dawdy is an archaeologist and anthropologist who links scholarship with historical preservation to illuminate the history of the Atlantic World since 1450. In addition to work on the Southeast United States and Caribbean, Dawdy has produced insightful studies of New Orleans from its establishment as a French colony to the present day. In Building the Devil’s Empire: French Colonial New Orleans (2008), she integrates the intellectual life of the community with the story of the adventurers, entrepreneurs, and smugglers who resisted governance, providing a markedly expanded narrative of the colonial dynamics and structure of the region. Her recent fieldwork in New Orleans, concentrating on the former site of the Rising Sun Hotel and St. Antoine’s Garden behind St. Louis Cathedral, is the largest archaeological excavation undertaken to date in the French Quarter. These two sites are an important part of her current project: an exploration of the connections between aesthetics and social life. Complementing her academic work, Dawdy has also been a vocal advocate for historical preservation. She served as special liaison between the Federal Emergency Management Agency and the Louisiana State Historic Preservation Office to ensure that recovery efforts in New Orleans after Hurricane Katrina remained cognizant of the city’s singular archaeological heritage. Through her boundary-crossing scholarship, fieldwork, and efforts to engage the public in uncovering the history of their communities, Dawdy is enriching the arenas of historical archaeology and urban preservation.

Shannon Lee Dawdy is the founder of Prefossil, a small non-profit that fosters projects demonstrating the sustainability of historic houses and older, simpler technologies. She recently completed a book manuscript entitled Patina: A Profane Archaeology that examines the intimate relations between people and old things like antiques, artifacts, heirlooms, historic houses, and ruins. The book is based on her twenty years of archaeological research in New Orleans and ethnographic interviews she conducted with survivors of Hurricane Katrina. Dawdy’s future plans include a study of contemporary American death practices and a non-academic book on the emotional landscape of climate change. She currently holds the position of associate professor in the Department of Anthropology at the University of Chicago.