Reinvigorating classic American plays with a spirit and urgency that eschews nostalgia and provides audiences with unexpectedly fresh and compelling theatrical experiences. 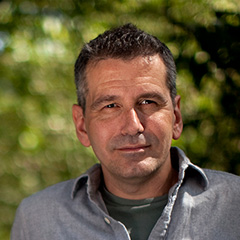 David Cromer is a theater director and actor who is reinvigorating classic American plays and illuminating their relationship to the present. His incisive interpretations of the twentieth-century repertoire honor the original intention of each work while providing audiences with more psychologically complex performances than previous renderings. Eschewing nostalgia and period kitsch, Cromer reveals the dark truth and unexpected humor in William Inge’s Picnic, while his meticulous attention to the expressive power of simple objects transforms a musical adaptation of Elmer Rice’s The Adding Machine into a compelling portrait of a desperate office worker that reflects our time. Every element of his production of Thornton Wilder’s Our Town—from set design, to costumes, to music, to the choice of actors—converges into a cohesive whole that evokes an immediate and powerful experience for viewers. Performing the role of the Stage Manager himself, Cromer adopts modern dress and a conversational tone and is simultaneously the omniscient, efficient director and a character in the play. The minimalist aesthetic of the production and his portrayal of the Stage Manager avoid the sentimentality characteristic of other versions of Our Town and, at the same time, increase the emotional force of the play’s exhortation to live in the present moment. From venues in Chicago to the theaters of New York, Cromer is re-staging earlier plays with a spirit and urgency that resonates with contemporary audiences.

David Cromer attended Columbia College, Chicago. He has directed and acted in plays presented at venues throughout the United States, including the Barrow Street Theatre (New York), Alley Theatre (Houston), Steppenwolf Theatre (Chicago), and the Lincoln Center for the Performing Arts, among many others.