Using sophisticated acoustic engineering technology to explore the previously invisible behavior of ocean creatures and address long-unanswered questions about the structure and behavior of food chains. 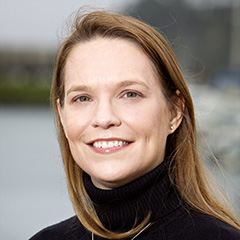 Kelly Benoit-Bird is a marine biologist who uses sophisticated acoustic engineering techniques to explore the previously invisible behavior of ocean creatures at scales ranging from swarms distributed over many cubic kilometers to individual predators. The food web of ocean surface waters begins with microscopic creatures that serve as the source of food for tiny organisms (zooplankton) just large enough to generate an acoustic signature. Although zooplankton drift in response to ocean currents, Benoit-Bird has shown that they use their modest locomotive capacity to form swarms with distinct three-dimensional structures that change with feeding conditions. Using multi-frequency acoustic backscattering, she has been able to reconstruct the feeding patterns of swimming predators of zooplankton (known as nekton) as they first pass downward through a layer of zooplankton, then reverse course and pass through upward. Having precise data about the horizontal and vertical distribution of oceanic food webs opens a new path for understanding the complexities of marine ecology. Further up the food chain, Benoit-Bird has investigated and illuminated the behavior of mammalian predators such as spinner dolphins, which hunt nekton in small, coordinated groups. These groups follow a carefully choreographed sequence of movements, repeated many times, to minimize the opportunity for the prey to escape. Using advanced acoustic engineering technology that she has modified and optimized for applications specific to her research, Benoit-Bird is addressing long-unanswered questions and providing the marine ecology community with a clearer picture of the structure and behavior of food chains.

Kelly Benoit-Bird received a B.S. (1998) from Brown University and a Ph.D. (2003) from the University of Hawaii at Mānoa. She was a postdoctoral fellow at the Hawaii Institute of Marine Biology (2003–2004) before joining the College of Oceanic and Atmospheric Sciences at Oregon State University, where she is currently an associate professor of biological oceanography. Her scientific articles have appeared in such journals as Nature, Marine Biology, and the Journal of the Acoustical Society of America.