Exploring the development of political thought and criticism in early modern Europe and shedding new light on the origins of the modern state. 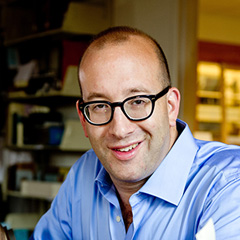 Jacob Soll is a historian whose meticulously researched studies of early modern Europe are shedding new light on the origins of the modern state. Drawing on intellectual, political, cultural, and institutional history, Soll explores the development of political thought and criticism in relation to governance from the sixteenth to the eighteenth centuries in Western Europe. Soll's first book, Publishing "The Prince" (2005), examines the role of commentaries, editions, and translations of Machiavelli produced by the previously little-studied figure Amelot de La Houssaye (1634-1706), who became the most influential writer on secular politics during the reign of Louis XIV. Grounded in extensive analysis of archival, manuscript, and early printed sources, Soll shows how Amelot and his publishers arranged prefaces, columns, and footnotes in a manner that transformed established works, imbuing books previously considered as supporting royal power with an alternate, even revolutionary, political message. In The Information Master (2009), he investigates the formation of a state-information gathering and classifying network by Louis XIV's chief minister, Jean-Baptiste Colbert (1619-1683), revealing that Colbert's passion for information was both a means of control and a medium for his own political advancement: his systematic and encyclopedic information collection served to strengthen and uphold Louis XIV's absolute rule. With these and other projects in progress — including an intellectual and practical history of accounting and its role in governance in the modern world and a study of the composition of library catalogues during the Enlightenment — Soll is opening up new fields of inquiry and elucidating how modern governments came into being.

Jacob Soll received a B.A. (1991) from the University of Iowa, a D.E.A. (1993) from the École des Hautes Études en Sciences Sociales, and a Ph.D. (1998) from Magdalene College, Cambridge University. He has been affiliated with Rutgers University, Camden, since 1999, where he is currently a professor in the Department of History.