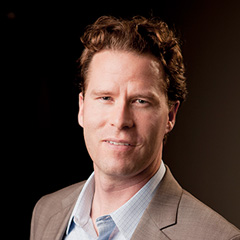 William Seeley is a clinician-researcher who integrates microscopy, magnetic resonance imaging, and clinical examination to explore the structural, functional, and behavioral aspects of human neurodegenerative disease. Seeley concentrates on frontotemporal dementia, a family of devastating neurological syndromes usually afflicting people in midlife, and second only to Alzheimer's as the primary cause of progressive pre-senile dementia. Though frontotemporal dementia results from degeneration only in specific cortical regions (that is, not globally or randomly), the mechanisms that trigger the onset and progression remain largely unknown. Seeley and colleagues observed that a morphologically distinctive cell type, known as von Economo neurons, shows a marked decrease in number with frontotemporal dementia, but not Alzheimer's disease. Using functional MRI, Seeley demonstrated changes in brain activity of afflicted individuals in regions that correlate with loss of von Economo neurons. Further differentiating patients based on behavioral manifestations, he has mapped specific changes in cortical connectivity networks that correspond with each clinical subtype of frontotemporal dementia. Considered collectively, these results connect damage at the cellular level with altered regional brain activity, and those observations with their symptomatic manifestations. Such imaging studies find immediate application in tracking disease progression and customizing therapeutic interventions for individual patients. Seeley's observations represent a key step toward identifying the molecular and cellular mechanisms underlying the initiation and spread of frontotemporal dementia and lay the groundwork for developing targeted treatments to halt its progression.

William Seeley received an A.B. (1993) from Brown University and an M.D. (1999) from the University of California, San Francisco. He completed his residency (2000-2003) in neurology at Massachusetts General and Brigham and Women's Hospitals in Boston. In 2003, he returned to the University of California, San Francisco, for a fellowship in behavioral neurology; he was appointed to the faculty in 2005 and is currently an associate professor of neurology in the Memory and Aging Center and director of the Neurodegenerative Disease Brain Bank. His scientific articles have appeared in such publications as PNAS, Neuron, and the Journal of Neuroscience.