Jazz Percussionist and Composer | Class of 2011 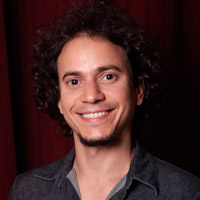 Dafnis Prieto is a percussionist whose dazzling technical abilities electrify audiences and whose rhythmically adventurous compositions combine a range of musical vocabularies. A classically trained musician who absorbed from an early age the multifaceted percussive traditions of his native Cuba, Prieto transposes elements from his Afro-Cuban musical heritage onto a jazz drum kit, incorporating congas, timbales, and the layered rhythmic patterns of rumba and son. Whether performing as a solo artist, bandleader, or sideman, his playing is characterized by a finely calibrated command of textures and nuances and an ability to execute highly complex, polyrhythmic structures with extraordinary speed and precision. As a composer, Prieto melds modern jazz harmonies, Cuban clave rhythms, other Latin and African influences, and funk-inspired arrangements to create works of great stylistic diversity that evoke a broad spectrum of moods. His 2006 recording, Absolute Quintet, showcases both his powerful and propulsive playing as well as his interest in composing for a nonstandard ensemble of organ, cello, violin, saxophone, and drums. The morphing rhythms and time signatures of Taking the Soul for a Walk (2008) further demonstrate Prieto's compositional reach and graceful way of slowing down or speeding up a given tempo. Through these and other recordings, his leadership of numerous ensembles, and additional projects involving dance, film, and opera, Prieto is infusing Latin jazz with a bold new energy and sound.

Dafnis Prieto studied at the National School of Music in Havana, Cuba, before coming to the United States in 1999. His additional recordings as a leader include About the Monks (2005) and Si o Si Quartet: Live at the Jazz Standard (2009), and he has performed at venues and in festivals throughout the United States, including the Jazz Standard, Lincoln Center for the Performing Arts, and the Museum of Modern Art. Since 2005, he has served as an adjunct instructor in the Department of Music and Performing Arts Professions at New York University.