Engaging a new generation of listeners with audio explorations of scientific and philosophical questions that evoke a sense of adventure and recreate the thrill of discovery. 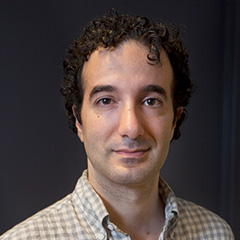 Jad Abumrad is a radio host and producer whose engaging audio explorations of scientific and philosophical questions captivate listeners and bring to broadcast journalism a distinctive new aesthetic. As co-host and producer of the nationally syndicated program Radiolab, Abumrad employs his background as a composer to orchestrate dialogue, music, and sound effects into compelling documentaries that draw listeners into investigations of otherwise intimidating topics, such as the nature of numbers, the evolution of altruism, or the science of emergent phenomena within ant colonies and other complex systems. As a result of his meticulous editing and conversational approach to interviews with experts, the structure of Radiolab episodes often mimics the scientific process itself, complete with moments of ambiguity, digressions, reversals, and surprising conclusions that evoke in audiences a sense of adventure and recreate the thrill of discovery. One humor- and insight-filled segment, entitled “A Very Lucky Wind,” tackles the subject of stochasticity, or the mathematics of randomness, by following the highly improbable route of a drifting balloon across the south of England. Another episode, “Cities,” examines a formula for predicting the demographic characteristics of cities around the globe by gathering evidence from participants in Dublin, Mumbai, Mexico City, and beyond. With these and many other Radiolab shows, accessible as radio broadcasts and as podcasts, Abumrad is inspiring boundless curiosity within a new generation of listeners and experimenting with sound to find ever more effective and entertaining ways to explain ideas and tell a story.

Jad Abumrad received a B.A. (1995) from Oberlin College. He has reported and produced documentaries on a variety of subjects for such public radio programs as All Things Considered and On the Media. Since 2005, he has served as producer and co-host of Radiolab.