Promise of This Moment

The concept of a year has never taken on as much significance as it has recently. Many of us eagerly awaited the end of 2020. Then the U.S. Capitol riots and insurgency spilled into the start of 2021, prompting us to look to Inauguration Day as a time of new beginning.

We acknowledge the disproportionate harm, felt as a matter of health and job loss and much more, in our historically marginalized communities in Chicago, the U.S., and globally. We reassert our commitment to doing our part to help bring about an equitable, inclusive recovery, with those most affected in the lead to determine priorities and what is best for the communities seeking to recover. No matter who we are, we have been touched, we have been affected, and we have changed—and we acknowledge that fact about our interconnected humanity.

In the United States, the massive disruption that characterized 2020 had an outsized impact on health and safety outcomes in communities of color. Rates of COVID-19 exposure, illness, hospitalization, and death were all higher for Native American, Black, and Latinx people who were twice as likely to die from COVID-19 infections.

Pandemic-related layoffs disproportionately affected Black and Latinx workers, who were less likely to receive aid and jobless benefits. At the same time, people of color and immigrants were more likely to be serving on the front lines of our global health emergency. These heroes kept us safe in uncertain times by maintaining functioning systems in health care, agriculture, manufacturing, and essential infrastructure. 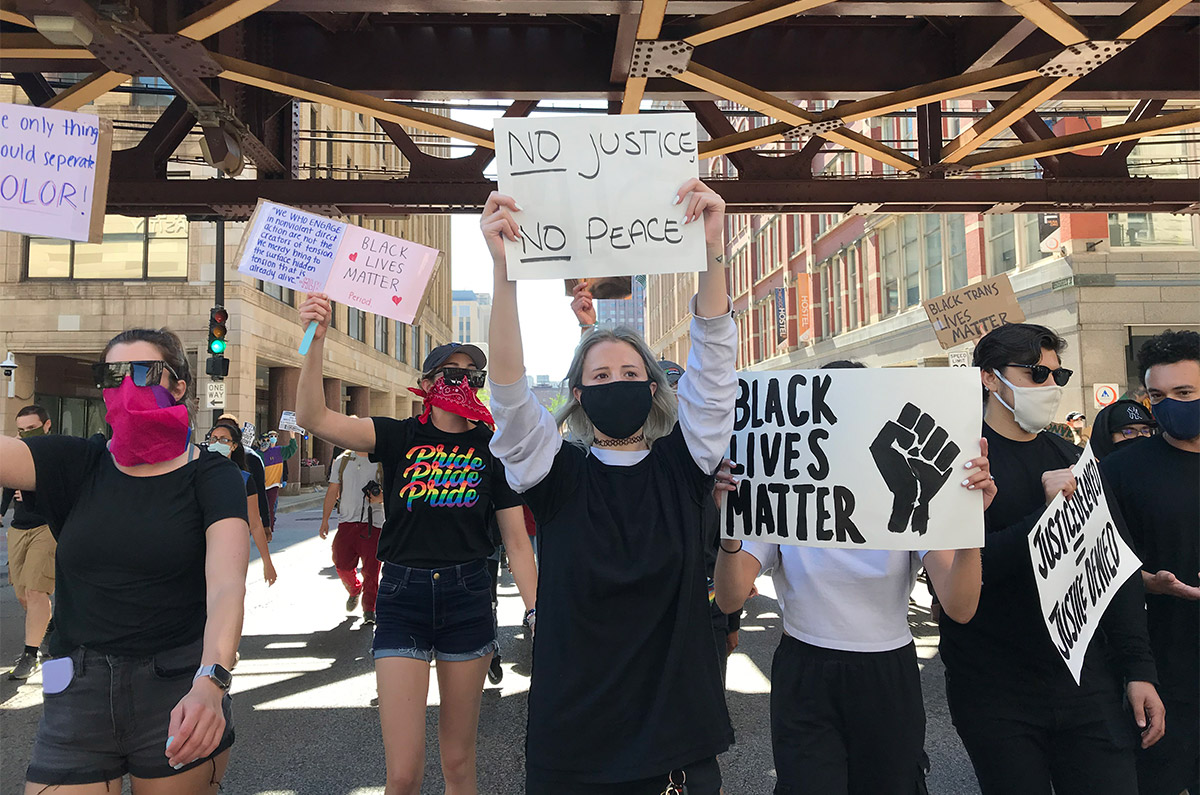 Protests in downtown Chicago in June 2020

While this past year has been like nothing we have seen in our generation, these disparities are nothing new. They have been a perpetual consequence of a racist status quo that has existed since our nation’s founding. The post-Civil War promises that gave African Americans emancipation, citizenship, and the right to vote during the Reconstruction-era were never fully realized, because we never successfully eradicated structural norms in our society based on racist ideologies. As W.E.B. Du Bois so poignantly wrote of the period following the Civil War: “The slave went free; stood a brief moment in the sun; then moved back again toward slavery.”

Racism is our nation’s original preexisting condition. It is written into our laws and embedded in our institutions. Our justice system has over-policed and over-incarcerated Black, Indigenous, and Latinx people throughout its history, from convict leasing to modern-day mass incarceration.

Economic opportunities have more often benefited individuals who are White and already wealthy, from slavery to sharecropping and from redlining to minimum wage exclusions. One of the core purposes of the famous 1963 March on Washington for Jobs and Freedom was to correct the federal minimum wage, established first in the late 1930s, to include industries that employed high concentrations of Black people.

White people, myself included, have an essential role to play in dismantling the structures and practices that uphold systemic racism. We have to deconstruct our thinking and our practices that have brought us to this point of reckoning—that goes for individuals and institutions. It is clear that we need new directions in philanthropy to respond to urgent needs and to help communities recover. We cannot achieve success until we acknowledge the mistakes of our sector’s past that cultivated the paradigm we have today.

If money is medicine, as Edgar Villanueva has written in his book Decolonizing Wealth, how do we ensure that we are using and distributing it to heal the people we seek to serve? For decades, situational privilege has reinforced grantmaking methods in philanthropy that do not center the leadership of Black, Brown, and Indigenous people.

John Palfrey talks to Ai-jen Poo, a 2014 MacArthur Fellow and the co-founder and Executive Director of the National Domestic Workers Alliance, about how much work in our economy is invisible and undervalued, about caring for communities, and about the need for partnership across sectors. View the full conversation ›

This moment is forcing us to come to terms with how our sector operates—how we spend and invest our endowment, how we use our balance sheets and power to break down systems. Our critics say we move far too slowly to adequately support the rapid pace of change grassroots movements require.

Philanthropy’s overwhelmingly White staff and board rosters have too often embraced a top-down approach to solving the greatest challenges of our time. We have exerted our power over Black people, stifling their capacity. We have kept Black and Brown movement leaders mired in bureaucracy when we should have been enabling their freedom to lead. Those criticisms are fair and appropriate. We cannot make the terrible mistake of continuing business as usual.

We cannot achieve success until we acknowledge the mistakes of our sector’s past.

These inequities play out not just in the United States but in fact around the world. The gap between wealthy nations and those with fewer economic resources once again presented a renewed crisis as the availability of life-saving vaccines, medicines, and practices have not spread equitably across the globe. Within countries where the MacArthur Foundation makes grants, we have seen similar disparities play out along lines of gender, social class, and abilities.

At MacArthur, we remain steadfast in our commitment to building a more just, equitable, and resilient world—and it is all the more important to do so through a racial and ethnic equity lens. In pursuing an equitable recovery, we will reinvent systems to create more inclusive communities in the United States, Nigeria, and India in particular. Where we see the impact of White supremacy and the legacy of slavery and displacement in the United States, we see the legacy of White supremacy in the form of colonialism and extractive trade practices internationally.

We have the responsibility to learn lessons from the past. We have much to learn from Black, Indigenous, and People of Color (BIPOC) leaders—in all the places we operate—about how to organize and consolidate our collective resources to meet the moment and fund a movement.

We must reconstruct the philanthropic sector, so it continually interrogates the universal impact of White supremacy and works to end it. Our collective aspiration at MacArthur is doing our part to break down systems and structures of oppression and exclusion wherever they present themselves, within the workplace or out in the world.

In the summer of 2020, we issued “social bonds” to make $125 million in additional grants and investments in people, organizations, and communities. Our goal is to put these funds to work in an intentional, transparent, and accountable fashion toward the reconstruction of new, more equitable and inclusive systems and structures.

We are committed to a BIPOC-led reimagining of what is possible.

We took advantage of historically low interest rates to be able to give out more money in a time of great need. One way of looking at it: we at MacArthur, along with some of our foundation partners, are leveraging our balance sheets to support individuals and communities who in turn will generate high social returns on the use of these funds.

Our first $25 million in grants addressed anti-Black racism, supported Native Americans impacted by COVID-19, strengthened voter education and mobilization, and combatted voter suppression. To ensure an equitable recovery globally it is essential to address the specific needs of women, trans people, and children who are Indigenous or ethnic-minorities. We awarded grants to organizations to respond to increased gender-based violence, reduced access to healthcare, fewer safe spaces, and unequal workloads.

We intend to allocate the remaining funds with a focus on racial and ethnic equity. In making these grants with the social bond proceeds, we seek to be accountable to the commitments we have made to deconstruct systems of White supremacy and reconstruct equitable systems in their place. To hasten an equitable recovery in the wake of the pandemic, we are committed to a BIPOC-led reimagining of what is possible that prioritizes their vision and needs.

The substance of our grantmaking and investing is as important as our mode of operating.
We continue on our Just Imperative journey, which is grounded in the values of diversity, equity, and inclusion, as we strive to become an anti-racist organization.

We aim for culture change. Our aspiration is for each member of the MacArthur community to feel a sense of belonging and a profound recognition that the Just Imperative is a part of all of our work. We continue to become more diverse as a Foundation and attempt to do the same with the organizations and people we support.

We continue on our Just Imperative journey, which is grounded in the values of diversity, equity, and inclusion.

In service of that mission, we launched a demographic survey of our U.S.-based grantees and impact investees in 2019 to better understand how our grantmaking and impact investments align with our values. 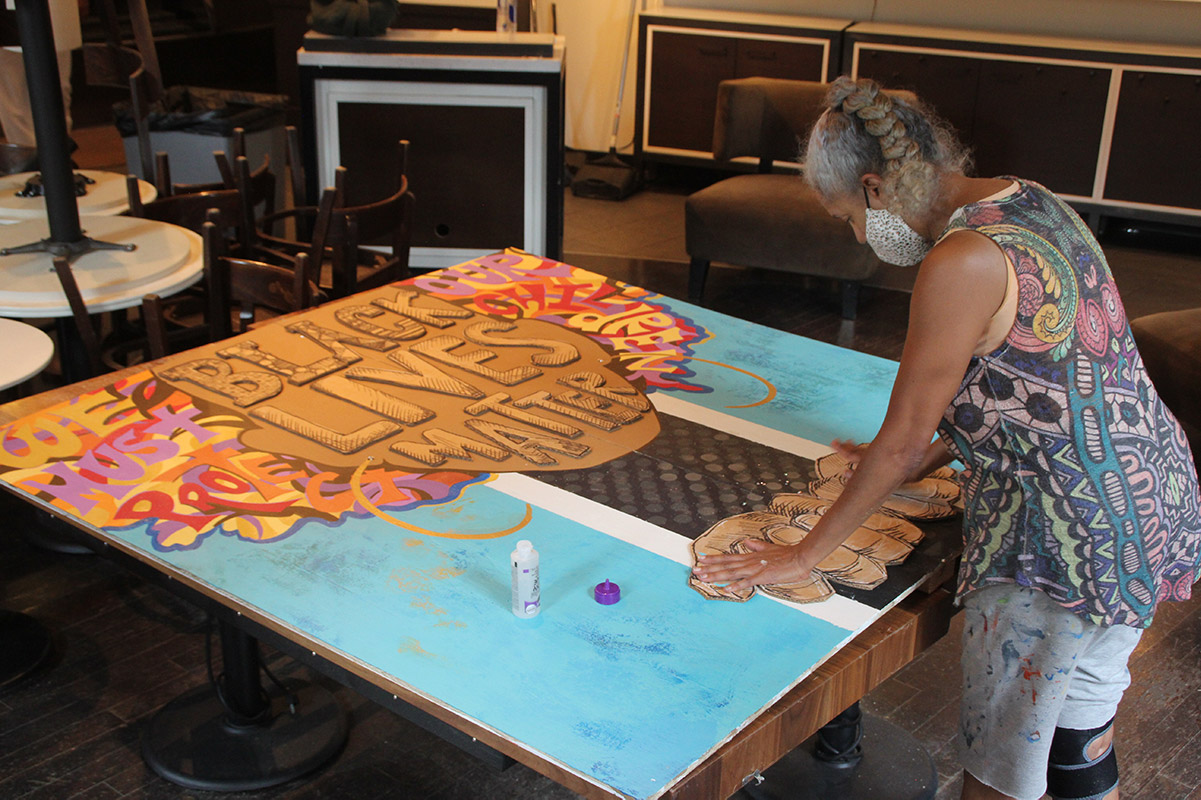 MacArthur commissioned Dorian Sylvain to create artwork on the theme of Black Lives Matter for the Marquette Building.

As an institution, we aspire to do more than reflect the status quo: we want to help lead the sector in changing it. We are committed to supporting a more diverse set of organizations and individuals in the years ahead. As we measure progress, we will define relevant terms and develop metrics for determining how organizations fit these definitions. For example, we have begun to consider how we define BIPOC-led, BIPOC-serving, and BIPOC-centered organizations.

We are committed to supporting a more diverse set of organizations and individuals in the years ahead.

We seek to improve our relationships with our grantees and all partners, breaking down barriers and silos where we can. In Nigeria and in India, we will deepen the ways we listen to and support the communities in which we operate and those with whom we partner, respecting locally defined needs and culturally appropriate responses. In the U.S., we will continue to walk beside Black-led foundations, including Crossroads, the Chicago Community Trust, and the Ford, Field, Grand Victoria, Mellon, and W.K. Kellogg foundations. These key partners and leaders are doing imaginative work, building and creating with the future in mind. In our hometown of Chicago, roughly 20 foundations are led by people of color, more than half of whom are Black women. We will follow the example set by visionary Black women, in particular.

We are a learning organization, devoted to the work of evaluation and holding ourselves accountable for our progress as well as our failures. Speaking of failures, we acknowledge the persistent role of White supremacy culture in aiming for perfectionism; instead, we proceed in the knowledge that we will make mistakes and may cause harm along the way, even as we seek to improve and to do good in the world. No matter what, we strive to be a major force for change and for good in philanthropy—known to all who work with us as a positive collaborator, partner, and innovator.

Promise of This Moment

We recognize the opportunity before us now to reconstruct something better.

We look to the future. What lessons can we learn from this once-in-a-lifetime moment? What lasting changes do we need to make as an organization? How can we deepen our understanding of racial justice grantmaking in a way that is enduring, rather than just immediate? To realize the promise of this moment we need a sustained focus on anti-Black racism and other forms of injustice and inequity around the world.

We stand in solidarity with our peer foundations and those in whom we invest and with whom we partner. We look forward to the challenging work to come.