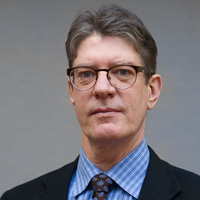 Before joining the Foundation, he was a writer, researcher, legal analyst, and director of projects for the National Center for Juvenile Justice (NCJJ), where he became a national authority on comparative legal analysis of state transfer and blended sentencing laws. His research and writings ranged over the whole field of juvenile justice: he directed evaluations of a statewide delinquency grant funding initiative in Pennsylvania and a state-administered dependency attorney-procurement system in Maryland; served as principal investigator on a study of jurisdictional change options commissioned by the state of Vermont; co-edited a nationally-used juvenile probation practice guidebook; and had a lead role in planning, monitoring, assessing and documenting the multi-state Models for Change juvenile justices systems reform initiative.

Griffin began his career as an attorney, and before joining NCJJ had practical experience as an editor of business-oriented legal publications and as a freelance journalist whose essays, profiles, and general-interest reporting appeared in magazines and newspapers nationwide.