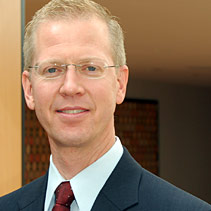 Mark Franke is the Managing Director of Private Equities, a portfolio with current commitments of approximately $1 billion, since 1999.

Franke started his career with the Foundation in January 1989 as an Analyst in Real Estate, initially working on the undeveloped land portfolio for two years and then on developed properties for two years as a Real Estate Representative. From 1993 to 1995, he was an Analyst in Private Equity. Then from 1996 to 1998 Franke oversaw the domestic equity portfolio and, in 1998 and 1999, assisted in the development of the alternative marketable strategies portfolio.

Franke received a Bachelor of Science in finance, graduating with honors, from the University of Illinois. He became a Chartered Financial Analyst (CFA) in 1998 and is a member of the Investment Analysts Society of Chicago.