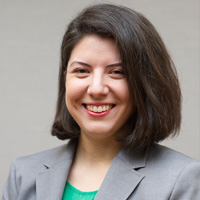 Prior to joining the Foundation in 2012, Lauren worked as Project Manager and Researcher for the Rada Film Group on the 13-year longitudinal documentary American Promise about race, parenting, and education, which received a Special Jury Prize at the 2013 Sundance Film Festival and was broadcast on the PBS series POV in 2014. Previously, Lauren worked with Black Public Media, and Public Policy Productions.

From 2013-2015, Lauren served on the board of Latinos Progresando, the largest Latino-led, low-cost, family based legal immigration services provider in Illinois. She is a member of the steering committee of Nuestro Futuro, an initiative of the Chicago Community Trust.