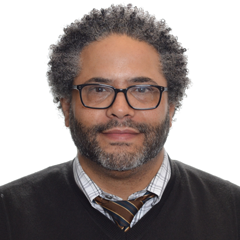 Geoffrey works with the Chicago Commitment team with a focus on the Advancing Leadership and Culture, Equity, and the Arts grantmaking areas.

Geoffrey began his career as a community organizer with a Chicago grassroots organization called the Southwest Youth Collaborative. He led summer jobs for youth programs and organized a citywide Youth Summit on juvenile justice issues. Later, at the Children & Family Justice Center at the Northwestern University School of Law Legal Clinic, Geoffrey led Community Panels for Youth, a community-based juvenile court diversion program based on the principles of restorative justice. Geoffrey then held various positions in nonprofit development and programming.

Geoffrey holds a Master of Arts degree in Sociology from the University of Illinois at Chicago, where he completed additional work toward the PhD with a concentration in Race, Ethnicity, and Gender. As an Instructor, Geoffrey taught undergraduate level courses in Social Inequalities and Racial and Ethnic Groups. He received the American Sociological Association Teaching Innovations & Professional Development Award, the UIC Graduate College University Fellowship, and the UIC Martin Luther King Jr. Scholarship. Geoffrey received a Bachelor of Arts degree from the University of Michigan with high honors in African-American Studies and History.