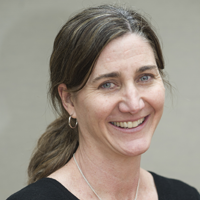 In this capacity, Liz has responsibility for grants management, knowledge management and meeting and planning services. She is also a member of the Executive Leadership Team that advises the President of the Foundation on policy matters and strategic direction.

Liz previously served as the Secretary of the Foundation and as the President's Chief of Staff.

Prior to her time at MacArthur, Liz worked in the Clinton Administration for four years, most recently at the U.S. Department of Labor for the Secretary and the Deputy Secretary where she was responsible for managing policy and legislative development on a variety of issues, including: veterans and women's, international labor and discrimination. She began her career at the White House in the Office of Cabinet Affairs, which is the liaison office between the White House and the government agencies. She managed special projects for the Cabinet Secretary, including: coordinating inputs from agencies for weekly update report to the President, researching and drafting remarks, and preparing briefing papers for the President.

Liz received her M.A. in International Peace Studies from the University of Notre Dame, concentrating on international conflict resolution. She received her B.A. from Notre Dame, majoring in the great books program. Between undergraduate and graduate studies, she worked for one year at the YMCA in Northern Ireland.