Dramatizing the myriad effects of late-twentieth-century China's sweeping social changes in a deeply moving, yet quietly understated, style of storytelling. 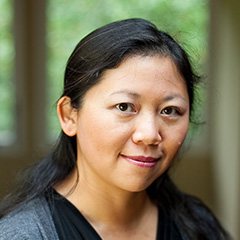 Yiyun Li is a fiction writer whose spare and quietly understated style of storytelling draws readers into powerful and emotionally compelling explorations of her characters’ struggles, set both in China and the United States. After moving from China to the United States in 1996 to pursue a graduate degree in immunology at the University of Iowa, Li shifted her studies to the Iowa Writers’ Workshop and focused on fiction writing in her adopted language of English. Her prose in this second language bears the inflections of her mother tongue and culture, lending a vivid and arresting quality to the voices and experiences she presents to English-speaking readers. In her story collection A Thousand Years of Good Prayers (2005), Li inhabits the lives of ordinary individuals, rendering their separate predicaments with empathy and a keen eye for illuminating details that give each character depth and nuance. Through these intimate and elegantly constructed portraits of people largely ignored by history—Chinese nationals as well as expatriates in the United States—Li magnifies and dramatizes the myriad effects of late-twentieth-century China’s political upheaval and sweeping social changes. She expands upon related themes on the larger canvas of her novel The Vagrants (2009), which depicts life in a provincial Chinese town during the turbulent years following Mao’s death in the late 1970s. The novel opens on the day a young woman is to be executed as a counter-revolutionary and proceeds to trace the intersecting fates of a wide-ranging cast of townspeople. In these and other works, Li crafts deeply moving fiction that offers Western readers a window into unfamiliar worlds as well as insights into human nature that transcend ethnicity and place.