Philanthropy and the Future

The international system – how nation-states relate to one another – will remain an ungoverned “state of nature” for the foreseeable future, despite globalization and other internationalist trends.

The United States will retain its global preeminence in military power. No other nation in world history has been so uniquely capable of projecting force with such lethality and precision virtually any place on earth. The U.S. government, with popular support, will continue to develop and deploy the most technologically advanced weapon systems in the world.

Much of our military strategy will be essentially unchanged, depending on traditional priorities such as superiority in weapons sophistication, logistics, communications, and intelligence. But a heavy reliance on new technologies may also lead to vulnerabilities. Adversaries unable to confront the United States directly will be tempted to attack cyber and space assets – at present inadequately protected – and so immobilize the defense infrastructure. A real defense of America’s connective tissue would make more sense than the current default strategy: the threat of direct crippling “kinetic” counterattack, which could lead to potentially disastrous escalation.

There is a persistent threat of war, even nuclear war, between India and Pakistan. Religious rivalry, persistent territorial disputes, and power imbalance make the relationship between the two countries inherently unstable. Conflict could be catastrophic, undoubtedly with consequences for the United States and the world.

Only one rival, however, could upset America’s global position: China. Already a great power, China is likely to continue its peaceful rise, hold together as a nation, and come to a competitive accommodation with the United States in the Asia-Pacific region. But other scenarios are possible. 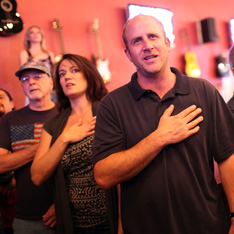 America then faces few threats from abroad. But there are risks for national security at home related to our dysfunctional political system. We face severe systemic fiscal problems, an increasing concentration of wealth that may undermine both equality and opportunity, and public discourse that is rancorous and divisive. A deep disagreement within American society about the role of government, the freedom of individuals, and how to ensure the common good remains unresolved. If this situation does not improve, the United States may become weaker – a far less cohesive society and less attractive in terms of quality of life or social justice. This outcome would erode the nation’s “soft power” as an example and inspiration for the rest of the world.

I hope that America will remain a world leader in democracy, opportunity, and freedom – not only as a military power. For that to happen, we need an interested and informed citizenry, responsive and effective governance, and a sophisticated appreciation by our leaders of the risks and opportunities open to the nation.