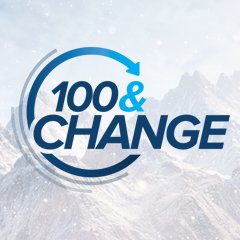 100&Change is a competition for a single $100 million grant to fund a project that promises real and measurable progress in solving a critical problem of our time. It was designed to bring in ideas from outside the Foundation, both domestic and international, about the most promising solutions to the world’s most urgent problems. MacArthur sought proposals that articulated both a problem and a proven solution, while seeking to create value for participants beyond the ultimate grant recipient. Finally, we hoped that the competition would generate excitement and inspire other funders to make the large investments needed to fund solutions at scale.

The selection process was designed to be fair, open, and transparent. The judges evaluated each proposal using four criteria: meaningful, verifiable, feasible, and durable. Their scores and feedback were provided to the applicants. MacArthur’s Board of Directors selected eight semi-finalists from the group of highly scored proposals which went on to complete a revised proposal. The semi-finalists received technical assistance from external consultants and received support from Foundation Program Officers. Based on the revised proposals, the Board selected four finalist organizations that presented their proposed projects at a live event in Chicago. Shortly thereafter, MacArthur announced the $100 million award recipient as well as additional unplanned grants of $15 million to each of the three finalists and smaller grants to all of the semi-finalists to contribute towards participation costs.

The Foundation contracted with Abt Associates to conduct an evaluation of the application and selection processes of the competition. The evaluation was designed to identify areas that worked well and should be preserved for future rounds of the competition and those that could be improved. Abt conducted a mixed methods evaluation, with a combination of primary data collection activities and analysis of existing data. Data collection included interviews and focus groups with a range of 100&Change stakeholders to understand their unique experiences and perspectives.

The evaluation found that many aspects of the competition worked well and should remain in place for future rounds, including the open call for proposals; the use of judges who are external to the Foundation; the technical assistance provided by external consultants; and the support provided to applicants by Foundation staff. Abt’s evaluation of 100&Change found that almost all of the media coverage was positive or neutral and accurate about the competition.
Abt’s evaluation concluded that the diligence and consideration that the Foundation put into running the competition paid off in terms of a positive overall impression of participants and observers. The evaluator identified a number of areas the Foundation may wish to consider in order to improve in the application and selection processes for future rounds of the competition, based on some of the following findings:

The Foundation is in the process of planning the next round of the 100&Change competition taking these findings into consideration. Some of our initial thinking can be found in the foreword to the evaluation. We look forward to reporting on the implementation of the competition and the impact of the awards made by the Foundation.