Mandolinist and Composer | Class of 2012

Creating a new musical aesthetic and a distinctly American canon for the mandolin through a lyrical fusion of traditional bluegrass orchestrations with a range of styles and genres. 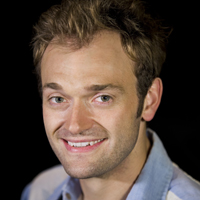 Chris Thile is a young mandolin virtuoso and composer whose lyrical fusion of traditional bluegrass with elements from a range of other musical traditions is giving rise to a new genre of contemporary music. With a broad outlook that encompasses progressive bluegrass, classical, rock, and jazz, Thile is transcending the borders of conventionally circumscribed genres in compositions for his own ensembles and frequent cross-genre collaborations. Although rooted in the rhythmic structure of bluegrass, his early pieces for his long-time trio, Nickel Creek, have the improvisatory feel of jazz; his current ensemble, Punch Brothers, evokes the ethos of classical chamber music even while adhering to the traditional instrumentation of the bluegrass quintet. The Blind Leaving the Blind, a song suite on Punch Brothers’ first album (Punch, 2008), extends the sound of bluegrass in its range of harmonies and polyrhythms. Thile further explores the symphonic dimensions of the string quintet in both the improvised and elaborately composed works of Antifogmatic (2010). Among his many collaborations, Thile has expanded the reach of the mandolin in Ad Astra per Alas Porci (2009), a three-movement mandolin concerto, and in his solo mandolin interpretations of Bach’s works for violin, which showcase his technical mastery and fluid, soulful phrasing. Through his adventurous, multifaceted artistry as both a composer and performer with various ensembles, Thile is creating a distinctly American canon for the mandolin and a new musical aesthetic for performers and audiences alike.